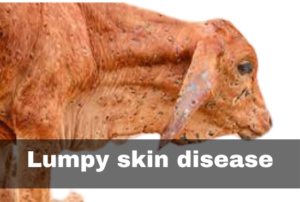 According to the food and agriculture organization, the mortality rate due to lumpy skin disease is 10 percent.

Moreover, the lumpy skin disease in cattle was first found in Zambia in 1929. It is most common in Middle East countries. Many cases of  this illness in cattle were reported in Europe in 2015. In 2016 two countries, Balkan and Moscow faced a lumpy skin outbreak. In addition, the first case of LSD in cattle was reported in India in 2019.

According to sources, more than 23000 cattle are affected by LSD  in Pakistan and spreading very fast.

So if you have cattle herd or cattle form, keep reading this article. It will help you to prevent LSD  in cattle.

What is lumpy skin disease in cattle? 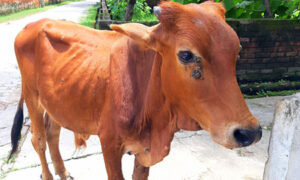 In this disease, small nodules or patches form on the skin of cattle. It’s a fetal disease because it affects the overall health of infected cattle. Additionally, the LSD is contiguous, spreading quickly from one animal to another.

Also read: things you have to know about the puppy parvo virus

There are different symptoms of LSD , such as

How does lumpy skin disease spread?

According to reports, the lumpy skin disease spreads too in cattle because of arthropod vectors such as ticks, biting flies, mosquitos etc. These arthropods play the role of transmitters; when they suck an infected person’s blood and flee to healthy cattle, they transmit the LSD virus to a healthy animal. Additionally, it also spreads by using the contaminated utensils of infected cattle, like providing them water in the same pot etc.

Few types of research showed that it also spread by direct physical contact of cattle with each other.

Scientists are doing further studies to know the exact reason for spreading the LSD virus in cattle.

How to prevent lumpy skin disease?

As you know, it’s challenging to protect your animals from viral outbreaks. But few things can help in the prevention of LSD in animals. First of all, if there is an outbreak in the city, quarantine your castles, like keeping them alone in a clean and safe place where they don’t have to interact with the infected animal. Secondly, clean their area regularly. As per reports, it spreads with the help of mosquitos, fleas, and ticks, to kill all these vectors, spray on them, and clean your place from these pathogens.

Third, if you have any infected animal, keep him away from others and do a pope treatment. The fourth and most effective way of preventing lumpy skin disease is to do a vaccination of your cattles LSD, and it will keep your animals safe from the disease.

How to treat disease?

As such, there is no treatment option for LSD in cattle. Only a vaccine can help you to get rid of this fatal disease. Scientists and health experts are trying to find the best treatment options for this disease. For now, doctors are using different things like antibiotics, anti-inflammatory medicine, and penicillin on lumps or wounds. 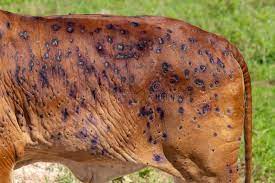 So if your cattle have lumpy skin disease give them antibiotics and anti-inflammatory drugs, but before giving anything to them, contact your vet first.

How does lumpy skin disease transfer from one cow to another?

it  is a viral disease which spreads by blood-sucking insects. The insects suck blood from insects, carry the virus from them, and transfer it to another cow by biting it.

Can a human get lumpy skin disease from cattle?

No, it doesn’t transfer to humans. So humans, who are taking care of their infected animals, are safe from this virus.

Yes, the LSD virus has different variants, and one variant of this virus affects sheep and goats. So keep your infected animal away from goats and sheep.

Is there any vaccine for lumpy skin?

Is a LSD in the cow infectious?

Yes, it is highly infectious.

How long does a lumpy skin disease take to heal?

As you know, it’s a viral disease, so it takes time for healing. According to reports, in most battles, it takes one to 3 months, but in a few severe cases, it takes up to 8 months for complete healing.

Can we use the milk of lumpy skin disease infected cows?

Yes, you can use it. According to limited studies, heat kills all the germs when we boil milk, so it’s safe to use milk.

Can we eat the meat of LSD infected cattle?

No, we shouldn’t use the meat of LSD cattle because if you don’t cook properly, there is a chance you get ill, or your body will show some reaction because of this virus.

As you know, according to history, we have been experiencing lumpy skin disease issues in our cattle for more than one decade. It is most common in Asian and North British countries. Every year thousands of animals expire because of this fatal disease. The saddest thing about this disease is that it has no proper cure, and you just prevent this disease with the help of vaccination. Currently, this disease is hitting Pakistan and nearby countries.

So if you have a herd of cattle form, get your cattle vaccination done before the outbreak of  because only vaccination is an effective way to keep this disease away from your cattle.